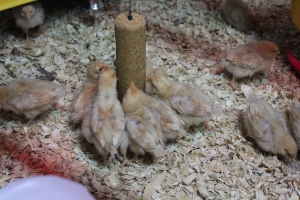 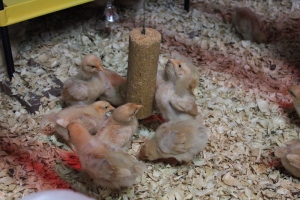 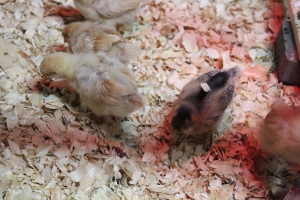 The chicks are growing quickly into teenagers.  It is amazing how fast they grow.  We will post pictures later but they now have wings and the tails are coming in quickly.  They are kind of getting to the awkward stage.  They have downy fluff but at the same time they are getting real feathers.  I guess if these were humans they would also have zits.

Not only is the coop building and run finished, the nesting boxes, the waterer and the food dispenser are also in.  The windows all have shutters now so I can adjust the ventilation as needed.

In the spring they recommend that birds not be put out into the permanent coop until the 4th or 5th week; mostly because of the cold.  It is the end of July and they are now 2 weeks old and it is anything but cold.  We are going to be moving them out to the farm from the basement brooder the first weekend in August (about 8 days from now).  For one week they will live simply in the coop itself, not venturing outside.  It will be more like just a larger brooder with a bit more room to move around.  The next week we will program the automatic coop door and start to entice them out into the run.  They will be big enough to handle it and they will indeed, by that time, be about 5 weeks old.  I (Jon) will be able to be out there during that time so they won’t be left alone at all.  I can work from the farm so I am elected.

At that age it is important to keep an eye out as to who is a rooster and who is not.  I ordered 3 roosters, expecting there to be a fatality or two but so far we have had none.  My chicken bible says that having 1 rooster for every 12 to 20 birds is plenty so I wouldn’t think we would have more than 2.  The odd man out gets named Stew.  If you don’t separate them out they will start to fight and that can get kind of ugly…. if you are a guy, think of how you were around girls in high school…. same thing.

After finishing the coop and its furnishings I stood back and surveyed all of the creation.  All I can say is…… they better appreciate this Chicken Hilton, there is a piece of my ass in every part of it.  Now on to fencing in the garden and getting it ready for next spring!  More fence posts to dig!  Woohoo!!