This article was posted by a friend on Facebook.  She and her friend have been members of the sustainable living and environmental movement in a significant way far longer than I have had the privilege.  I think this article helps to shed some light on what is -and may not be – important to the notion of localizing our food system.  Once a movement gets momentum there is always a fringe (and this case more than a fringe, especially in the city) that take a minutia of the movement and blow it up into monumental significance.  In this case, the micro-managing and obsession of cooking.  You know of which I speak.  When I was in high school my family was one of the first around to take up long distance bicycle touring.  We had decent bikes and we wore those old white helmets that looked like half an eggshell.  But we did it in T-shirts, shorts, and tennis shoes.  Now 30 some years later, everyone thinks they need to shave their legs and look like a competitor in the Tour de France simply to go on a nice bike ride.  This has now happened in cooking.  While having good equipment is nice and having a gathering of friends over wine and a nice meal contains a soothing animal warmth, the hipster movement has made cooking the Tour de France of food.  While yes cooking is important, the movement now has a plethora of those who are still out of touch with how their food is produced and the simple pleasures of eating foods that comfort like grandma used to cook.  A loose quote from the article is that if you cooked like your grandmother you would likely never open a cookbook.  Having to open a cookbook is indicative of how much of our roots, traditions and simple self-sustaining skills we have lost.  I would suggest that instead of learning how to cook Thai cuisine or attempting to become the next Julia Child, go to the farmers market, buy some great produce, and cook yourself up a good old fashioned hearty stew.  You will glow with satisfaction and you will have the basis of a recipe that you can build on and change and let evolve, that doesn’t require you to wear a stupid white hat and apron.

All credit to the author.  It couldn’t be stated any better.

The three of us got out today and laid out the 30 x 60 foot rectangle for the new pig pen.  Wow did we get anal about that!  We even made sure it is parallel to the house!  We got out the long measuring tape, measured the front edge from the farm house and equidistant from the sidewalk, put down the rebar, measured the hypotenuse of the right triangle to make sure it is squared and then put the posts in their proper proximity to the holes that will need to be dug.  They will all go in 2 feet deep leaving a 4 foot top.  Livestock panels and a gate will get attached and I am designing the shelter, water and feeding systems as well as shading areas.  To make this work we are going to have to find a couple of participants who want to buy into a whole pig or a side.  We will use one a year but they need to be raised in two’s or three’s because they are social.  Either that or we will get a few and then simply send one to the processor from time to time.  If we do that then we are given another set of variables; that being water heaters and heated shelters for winter.  Farmer Jon is thinking not.  That headache would fall squarely in his lap just like the chickens.  Unless I can quit my job…. HINT!  I can’t be out here to take care of wintering livestock.  Client livestock has something to say about that!  So we will probably get them in April and send them off to become freezer dwellers six months later and repeat every spring. 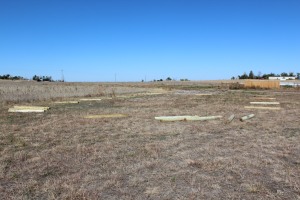 The chickens are always the first step on the road to composting.  They love greens!  In the past couple of weeks they have been feasting on carrot tops, beet greens, and tomato pulp left over from making sauce.  From there the litter goes out onto the compost heap and then finds its way back to the garden.  A closed nutrient loop!

Zina took some pictures of all of our harvesting and processing.  We have a nicely supplied larder this year.  Time for some tasty feasts! 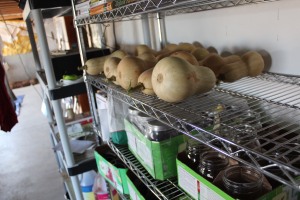 When we got our meat bird chicks back in May the hatchery sent us a “mystery” bird as a bonus.  It is always a guessing game as to the sex and type.  Our last mystery bird we guessed as a female until we caught “her” crowing.  He has now become one of our nicest and most protective boys.  This bird we guessed as a rooster and is now laying eggs.  Guess we suck and guessing!  So now that we know HE is a SHE we had to figure out what breed she is.  We have settled for now on Americauna.  She has the pudgy cheeks and feathering of one so until we see or hear differently “Squirtel” is a female Americauna.  Any opinions?