Friday morning Aaron and I got up and rounded up the little birds from the brooder at the city house.  It was entertaining trying to catch these little critters as they can now run and kind of flutter fly around.  We ended up using the top of a tupperware storage bin to kind of herd them into one place and then grab them up.

We rigged one of Basil’s old puppy crates by taping some cardboard around the sides to keep them from slipping through the wire sides.  It seemed like the perfect option.  After all they are birds…. birds should go in a bird cage.  Of course, there is thinking its the right answer and it BEING the right answer.

We got them in the cage and got them in the car just fine.  There was the expected cheeping and freaking and all I could do is keep driving.  Much about the crate didn’t hold its integrity while en-route.  At a stop light I looked back and the cardboard had all dislodged itself from the sides.  The birds all had their heads stuck through the bars and as I started to move again, noticed that a couple had escaped.  I was now on the highway doing about 75 mph and there wasn’t anything I could do.

Upon arrival at the farm, I took a few deep breaths.  After all, this is just a bunch of birds right?  What could have gone wrong?  Hmmm.

Evidently the floor of the crate slides in and out for cleaning.  On the road it slid and that was how some of the birds were escaping.  I left the escapees in the hatch of the car and pulled the crate out that was housing the rest of the birds.  The spacing of the bars under the plastic tray are bigger than the sides so about a half a dozen of them fell out onto the ground!!  I quickly closed the car, set down the crate and scrambled to pick up multiple birds that were involuntarily free ranging around outside of the coop!!!  Fortunately they were a bit disoriented and were fairly easy to grab.

I then opened the car back up and my heart sank.  Three of the five chickens were fine.  One was running around with Duct tape on her wing, but one had evidently been crushed by all of the jostling around in transport.  I had to break her neck to put her out of her misery.  Things happen, but I was sad that it had to be due to such a malfunction.  Next time we will use simple boxes.  I had seen the crates used and thought it would be great….. not so much.  The one with the duct taped wing evidently has a bruised foot too.  We are watching her and may put her in a small brooder to let her heal.

The rest of them (32) are going gangbusters!  They love their new home and have been scratching and pecking and hopping up and down the roosts!  They seem very content and have been loving the treats we have been giving them to spoil them into their new abode.

I food-milled a bunch of our tomatoes yesterday to get them ready to make sauce.  This leaves nothing but seeds, skin and a little bit of pulp.  I took two paper plates full out to the coop and the party was on!  At one point they had surrounded the plate so completely you couldn’t see it.  All that was visible were brown butts.  It didn’t take them an hour to completely pick the plates clean!

So I guess, as it should be, the introduction of livestock to the farm was not without incident.  It was only one fatality and all the rest are very content.  I am wrapping the run with chicken wire to make the holes smaller and when completed we will be able to let them have some small introductory ventures to the outdoors! 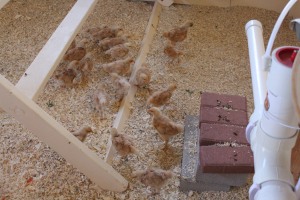 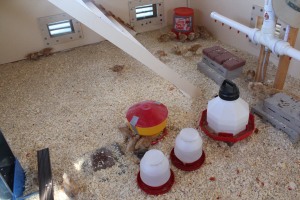 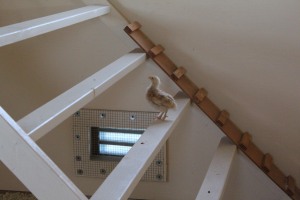 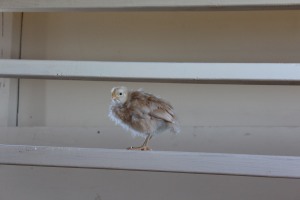