An interesting thing about being out here on the plains is the ability to see storms build and move on.  The other day I watched a storm develop where lower level clouds were blowing west while the upper level clouds were headed south and east.  I was convinced that it was going to spin up a tornado.   Fortunately it ended up being just a severe thunderstorm.  While we are in a drought (especially south of us near Colorado Springs) we seem to have entered into a period of monsoons.  For the past month, every afternoon around 4 o’clock the thunderheads build over the mountains and seem to pick up steam as they head east over us and then out into Oklahoma, Kansas and Nebraska.  We are getting some badly needed rain but of course that means that using the telescope has been out of the question.

As new moon is this week, I had thought seriously about bringing the scope out and leaving it up all week.  I am here acclimating the chickens to the coop and had some time on my hands.  Fortunately I didn’t get to it.  Yesterday we had at least 40 mph sustained winds out of the north.  It had the potential of laying the VLT flat and I would have been a sad puppy.  So I am watching the weather and the charts to see if there is a chance there will be any clearing into this next weekend.  In the meantime, here is the gift we sent to Kansas this evening!  Auntie Em, Aunti Em!! 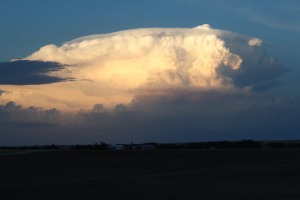