After almost two weeks of being completely stuck in the mud and high centered, the truck has been freed!  Brad, the farmer we are leasing much of the property to, is almost to the planting stage for winter wheat.  He came by and saw the truck in its mud grave.  He was driving the same tractor that plowed out our driveway this past winter.  Using my heavy chains, he pulled up, hitched up to the truck’s trailer hitch and inside of about 30 seconds the truck was out!  A tractor with 8 five foot tall tires – pulling out a Dodge 2500 Ram V10 Long bed….. now there’s something you don’t see at the golf course or the mall!!

It runs and still drives but it isn’t a 4 wheel drive anymore.  Either the transfer case is busted or the front differential.  Oh well.  We decided not to renew the license plates and they expired August 31st.  I have a thirty day grace period to get some things I need to do done, then it is off to sell my soul to the Dodge dealership for a new truck.  This one was purchased when Aaron was 5, has taken us to the top of the world and back dozens of times, more archery tournaments than I can count, hunting camps galore, hauled thousands of pounds of gravel and topsoil, white out blizzards in the high country, is on its second transmission, needs a third, and now has differential issues.  Thank you big truck, The Make A Wish Foundation will appreciate your contribution.

While we may be in a drought, the monsoons sure did a number on this place.  Here are a couple of pictures of the drainage and truck.  Two weeks later, the lake in the back 30 is only now subsiding.  Hopefully, when it goes, so will the mosquitoes!

We have also begun work on the garden fence.  One project gets finished and a dozen more get started.  I am fencing in about a half an acre and will also electrify it to keep out the deer, coyotes, antelope and rabbits (especially rabbits!).  I have laid out the posts and corners for the front facing section.  Saturday, Zina and I took the newly freed truck up to Greeley to the Tractor Supply Company and picked up a tractor mounted post hole digger.  As there will likely be close to a hundred posts I didn’t want to have to do them all with the hand held gas auger I have now. That thing will shake the life out of you.  The holes need to be 30 – 36 inches deep.  The power washer, to soften up the ground, and the auger, are going to get quite a work out.

Once the fence is up, then the JAZ Farm can kind of officially be deemed functional.  The construction projects will slow way down and the work on the beds, the irrigation, and the soil amending will take the place of lifting, sawing, screwing, nailing, cussing, ……

The 32 chickens are all over a pound a piece now and we have identified the three roosters we ordered as well.  The hens are supposed to start laying eggs around 20 weeks of age and that will put them somewhere near the first of the year.  As the days are shorter then and they need long daylight cycles to lay consistently we may not have many to speak of until spring.  At this rate, I will have the garden fenced and ready to do at least some planting in the spring, the chickens will be laying eggs, I will have built the second coop for the meat birds, brooded the meat birds, and have produce, eggs, and meat by early next summer.  My goal was to build the place out in a year.  Knocking on wood, it looks like that will happen.  Guess no one can accuse us EVER of being lazy…. although some have tried. 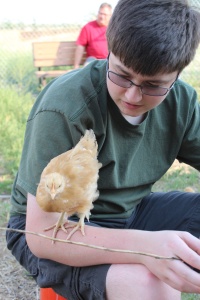 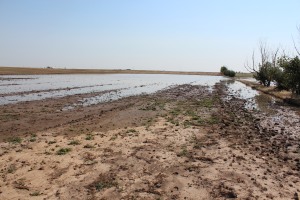