We had to ponder for a while how to best get a reliable source of water to the greenhouse.  The spigot from the house is slow, leaky, and is needed for other things, so hooking it up as the source for the drip irrigation system doesn’t work.  We have a ranch hydrant out in the chicken coop and we thought that maybe we could string another one over by the greenhouse, but that involves about 150 feet of trenching and some know how about how to tie it in to the water line coming from the well pump (trenching costs $15.00 a foot).  I know my limits and that is something I simply don’t want to tackle.  So I did some researching of water tanks, rainwater harvesting, using electric pumps on drip irrigation, etc. and I found a company that specializes in just such things!  We designed a system and ordered the parts.  Essentially, this is a 1000 gallon water tank that will be filled from a combination of snow capture, some rainwater capture (a certain amount is now legal in Colorado) and simply filling it up from the well itself (which will ultimately be the primary source).  The tank will be plumbed to a 1/3 horsepower pump that will keep a small pressure tank pressurized(similar to one’s attached to well pumps inside the home).  The drip irrigation system will be attached to the pressure tank with a timer attached to it.  When I determine the amount of watering that is needed daily, I simply set the timer and voila!  The pump detects when the pressure tank is low and switches on thus keeping the pressure in the irrigation lines constant.  I can bury the irrigation line using a middle trencher I have for the tractor (it will be down about 8 inches), instead of having to bring in a Ditch Witch to get the line down the 4 feet needed for a hydrant.

The plumbing, pressure tank and pump all arrived within a week of ordering it.  The tank itself had to be shipped by semi from someplace in Bumflucking Egypt.  Because these things are made of plastic I had to sign a document specifically stating my understanding that I MUST inspect the tank thoroughly prior to signing for it as these things can easily be damaged in transit.

I have been leveled this past week with the flu.  I don’t often get sick but when I do, I might as well begin funeral preparations.  Man I’ve been sick.  You know, the coughing up a lung, can’t smell, can’t hear, cold one minute sweating the next!  That kind of crap.  Yes, my beloved clients, I was still working through all of it.  God I hate tax season.

So no one decided to call and tell me this beast was coming.  Fortunately, so as not to pass this gem of a disease on to my son (he is in the throes of Calculus and we don’t need him bugging up now that he just aced his mid-terms), I am quarantined out at the farm.  It has been cold and windy and the air outside has been like poison on my throat.  So because of this vulnerable state, the creator in all of her mercy decided to deliver the tank un-announced!

No biggie.  The guy brought the truck in, wheeled the tank over to the end of the truck, even had a lift-gate (miracle!) and lowered the thing to the ground.  He was enthralled with the farm so I gave him a quick tour and he took some videos of the pigs for his kids.  He was concerned, because of the soft ground from the recent snows, about being able to turn himself around to get out.  I told him that if he backed up a ways toward the gate and because his trailer was pretty empty,  he should be able to put his trailer out on the field, keep his cab on the asphalt driveway and kind of jockey himself around.  Did he?  Are you kidding!? That would have been far to easy!  Why would anyone actually listen to the guy who LIVES here?  So he started to do his jockey-ing down hill too far from the road.  Instead of a series of backs and forth’s, he jackknifed the truck.  So he thought that he would just do a big circle.  This took him cab first into the field.  I watched him do it.  The weight of that diesel engine just sank that sucker right up to his gas tanks.  Of course, he tried to rock it out and that just dug deeper holes.  By the time I had walked out to him he had high-centered the thing and one of the back tires just spun freely with no contact with the ground.  That my friends is called STUCK!  Been there, done that.  The soil out here when it gets wet is like slogging through snot!

At first he asked if I knew of anyone with a tractor that could pull him out.  Knowing this part of the world, there isn’t a farmer around here that would knowingly put their tractor in that muddy field.  So he had to call in for a tow truck.  Turns out that another of his driver co-workers was stuck near here as well so they got a two-fer!  About an hour and a half later the hook arrived and pulled him out.  As my son said, “This wasn’t just stupid, this was ADVANCED stupid!”  Couldn’t agree more.  So off they went without so much as a “by your leave” or any offer to replace their divots – which are significant.

So as the JAZ Farm has proven time and time again, everything we want to do eventually happens, but NEVER, EVER, think it is going to go as planned.  Just keep smiling, just keep moving. 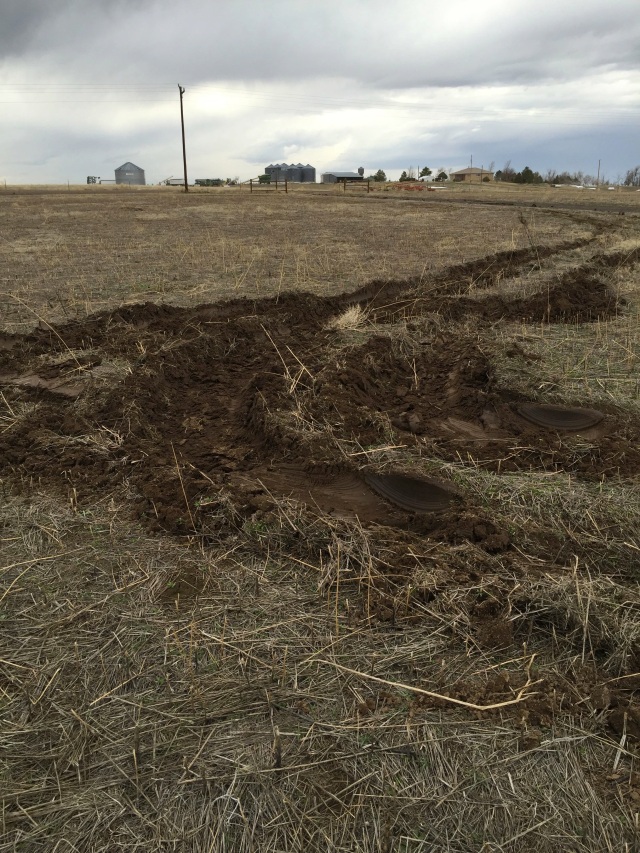 Hauling the new big bucket to its place behind the house!  It will just wait there until Farmer Juan isn’t hacking up phlegm balls.