So the month of July again has proven to be very busy.  Between work and homesteading, a kid who was brought down at work with heat stroke, and a dog that just had her other back knee operated on, its a wonder any of us sleep!  Basil is doing well.   We finally had to have her knee fixed because she was yelping when she put pressure on it.  She is my wonderful companion, but like anything in life she is also a money pit. Aaron had to stop his summer construction job this week because he was about to stroke out from the 100 degree desert heat.  Maybe next year he’ll get off of his butt and find something a little less demanding to do for the summer.  This job is pretty grueling.  He was down in foundation pits waterproofing concrete.

The garden has once again thrown us some curve balls.  The cucumbers are producing but they look like they are on the edge of death.  They have some kind of bacterial wilt and they literally went from beautiful green to dry and crispy over night.  The tomatoes and peppers are going to town along with the Tomatillos.  Our Blueberry and Blackberry bush experiments look like they are doing well too.

The problem this year has been a biblical plague of grasshoppers!!  They are destroying our beans and have eaten lots of holes in the potato plants.  They are leaving the tomatoes alone but are having a free for all with the herbs.  We tried a solution I researched that has you put all purpose flour on the plants.  The grasshoppers eat it, it turns to library paste in their mouths and they starve and die.  It appears to have had some effect but the garden is just too large to be able to do it on that scale.  Tomorrow is the battle of the grasshopper battalions.  Going to be weed whipping, spraying insecticide and all manner of combat tactics!  I have been injured for a couple of months and haven’t had the energy or desire to get out on a daily basis.  Now that I’m feeling more human, the garden warrior has awakened!

The two issues we face out here on the grasslands are weeds that grow while you are watching them, and this year, the hoppers from hell.  Zina and I have decided that we will need to find some other remedies than hours and hours on our hands and knees weeding.  For that we are going to start loading in piles of straw to make ground cover to help suppress the weeds.  I will also look in to somehow getting a semi load of wood chips brought in.

What we did notice this morning while out weeding is that the hoppers seem to live in the tall weeds during the day and come out and feast at night.  The entire perimeter of the garden is tall weeds:  Kochia, Lamb’s Quarter, Goat Head, and Amaranth.  We are going to spray (organically – an herbicide called Avenger) to kill these back to hopefully deprive the little demons from hiding places.  From there we will likely use something like BT to kill the insects.  If we have to we may have to resort to using some glyphosate around the perimeter but that would be as a very last resort.

However!  We have carrots, onions, beets, melons and squash all doing great!  Gardening has so many variables that each year is a different adventure.  It is, though, hard to not think you failed, when a crop or two goes south.  We just keep reminding ourselves that we are just feeding ourselves.  When you’ve tried this on a large scale you gain a tremendous amount of respect for those who try to do this for a living.

We successfully got our two huge pigs off to the processor this month as well.  Zina did a fantastic job getting them trained to get their treats from the trailer.  On loading day she just put the bucket on the trailer and on they went.  The biggest, Ruby, weighed in at 550 lbs.  We haven’t heard yet on the second but she will be close to that as well.  The freezers will be full again as we processed all of our meat chickens two weeks ago.  There will be pretty close to 700 lbs of meat in the basement.  Reason yet again why we added battery back up to the solar system.

So here are pictures of the melons and squash.  I also attached a video showing just how much we aren’t kidding about these damned hoppers!  Hard to believe its almost August! 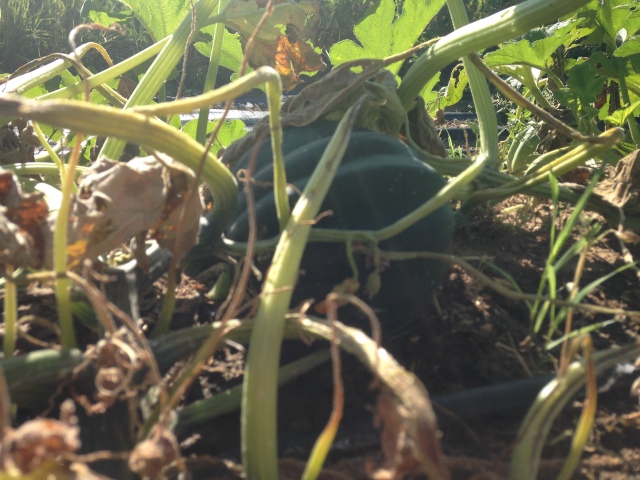 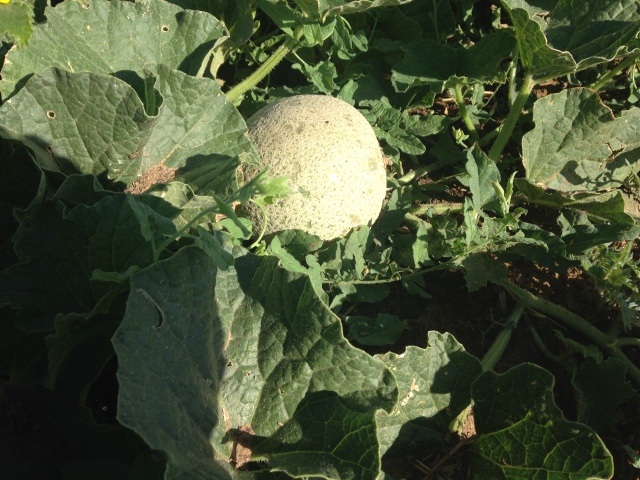