Not bad for a guy who, just six months ago, was in a hospital bed having his spine fused.  Zina and I have both agreed that now that the barn is built and the pasture fenced in, that the farm’s infrastructure is completed and its time to just be here and farm the place.  There will always be a hammer to swing at something, but none of it has to be a priority over the gardens and animals.

Friend Paul designs and produces archery equipment.  He called and wanted me to come with him to this year’s World Archery Championships in Las Vegas.  I used to go every year and bring my team of kids, but since having bought the farm, we have not been in at least 5 years.  He has a time share out there and it just happens to be just across the street from the South Pointe Casino where the shoot is being held.  Since we had just finished the big building projects I thought it would be a nice break.  We’ve been hanging out at his trade show booth and at the apartment.  Because we have kitchens, we bought our food instead of eating factory farmed slop at the buffets.  It has been so much fun.  Not only do we share archery as a common hobby, we both run hobby farms and our world views couldn’t be more similar.  Sometimes just begin around the like minded is very soothing.  It helps to re-confirm your sanity.

I have been using the week to unwind, but at the same time as a transition.  For the 30 years I slogged through my career I never had just a “routine” life.  It was largely crisis mode, multi-tasking and racing to deadlines; not to mention having gone through 3 major market corrections (thank god I’m missing this one – although I’m in touch with my partners fairly frequently).  Between work and the farm construction I was mostly running from one task to another.  So this week, during this break, I started to put together my new routine.  Some people in retirement want to travel and explore and do all the things they never got to do while they worked.  I couldn’t be farther from that perspective.  I’ve had too many adventures.  Like the Hobbits, I’ve seen the Orcs and Goblins and quite frankly wasn’t impressed.  I threw my ring in the fiery furnace and the eagles had to come and rescue me and carry me back home.  I’m done.  Right now I can’t think of anything more peaceful and healing than working in the gardens and hangin’ with the critters.

The weekend after I get home, Zina and I have an appointment at the Donkey’s Rescue Shelter over in Bennett.  The stalls and corrals are built and we will be adopting a pair of donkeys.  They will serve as companions and pets and predator deterrents.  They do not get along with Canine’s and will do well to keep the coyotes and foxes at bay.  In addition, we are in touch with a breeder and come spring (using another stall area in the new barn) will begin raising Nigerian Dwarf Goats.  I just ordered the fencing panels to build a turkey coop inside the barn, and we will be getting pigs again and our usual flocks of chickens.

So its been a nice break but I’m getting eager to get back at it on the farm.  There is so much to do, but now it can be done on a measured schedule instead of a breakneck pace that made a lot of it a struggle to maintain.

New batteries are arriving for the solar system next week as well.  All is coming back together…….  time to chill. 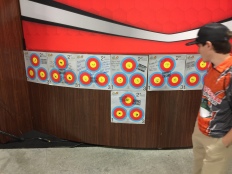 Above:  The completed barn.  Cupola and Stall door and everything ready to go.

I am retiring to the Shire.  Orcs need not apply.  Just a pipe, good ale, good food and company.  The rest can stay outside the fences.