“Create a life you don’t need a vacation from.”  Good advice.  We went to town today for some barn odds and ends and the parade of RV’s getting out of Dodge for the long weekend was pretty impressive.  Pick-ups pulling trailers, pulling boats or ATVs, going 80 mph with their hair on fire to get to a campground somewhere where they can be closer to their neighbors than they are at home in the ‘burbs and with no fence between them.  The stress levels at the local burger joint were palpable.  We went to the ACE Hardware Store, got what we needed and took the back roads home thanking the creator the whole way that we like living on our homestead.

We were awakened this morning to a call from the Post Office to let us know that a chirping cardboard box was waiting for us.  It was fun because Zina had never done a chick pick up before.  You can hear them in the sorting room and people just grin at you as you leave with a box of peepers.  We got them home and did the usual initiation to the brooder:  Open the box, pick one out at a time, put some Vaseline on their butts to help prevent pasty butt, dip their heads in the waterer so you make sure they know how to drink, set them by the food and heat source, repeat.  Job one completed, check.

Next up, get the turkey grow-out coop operational.  We put the door on the pig hut that is now the turkey shelter, put wood chips down, got out the waterers and feeders, washed them and filled them.  Off to the basement to catch birds and put them in the cat carrier.  For the next week our four little teenage Bourbon reds will be in the hut and not out in the run.  This gives them a chance to settle in before emerging into the big scary world.

Off to the feed store next.  We needed to resupply the basics, but we also ordered a ton of organic pig grower feed.  Now that the little oinkers have proven their heartiness (they didn’t die) we need the higher protein feed to get them up to weight, which takes about 6 months.  Organic feed ain’t cheap and it’s damned near impossible to find by the single bag, so 50, 40 lb. bags of specially mixed feed will be here in a week.  It would be nice to have a fork lift to unload it, but alas, that machine is named Jon.

Prior to getting the chicks, it was also the day to adjust the incubator settings – Up the relative humidity, lower the temperature.  If all goes according to plan, we should have more turkey babies hatching on Memorial Day.  Because of this impending event, son Aaron got the second tank rolled out to the barn for their brooder.  We’ll get the heat lamps, feeders and waterers out there tomorrow so all will be ready.  Ever see a diaper for baby turkeys?  They are really small.

Unexpectedly, the FEDEX guy showed up.  We really didn’t know why he was here.  Surprisingly, the shade cloth sheets I had ordered showed up a week early!  I tied one on to test it and they are  going to work great!  So tomorrow we will be finishing up the turkey brooder, doing critter chores, putting up the shade cloth on the raised beds before settling into a week of planting.  The plants in the greenhouse survived the freak cold snap.  They look a little shocked, but I’ve seen them snap back from worse.  It’s supposed to be in the 70’s and mostly sunny for the next week.  Time to get the roots in the ground.

So that’s what our vacation time looks like.  Now to sit on the beach with my foo-foo drink.  Maybe make some S’mores.

Baby turkeys freaked out about their move:

The new shade cloth for the garden beds: 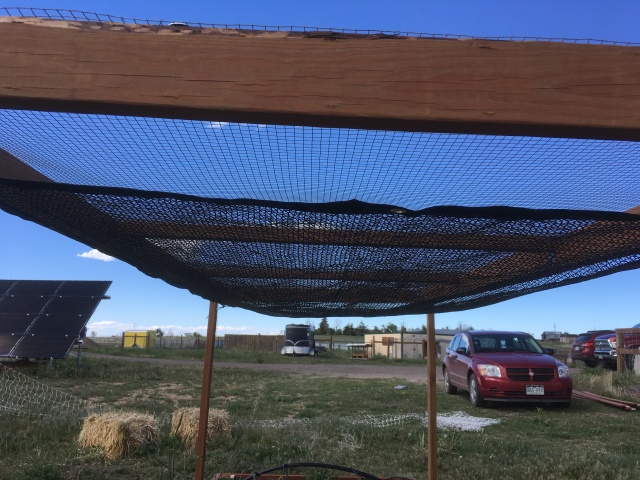 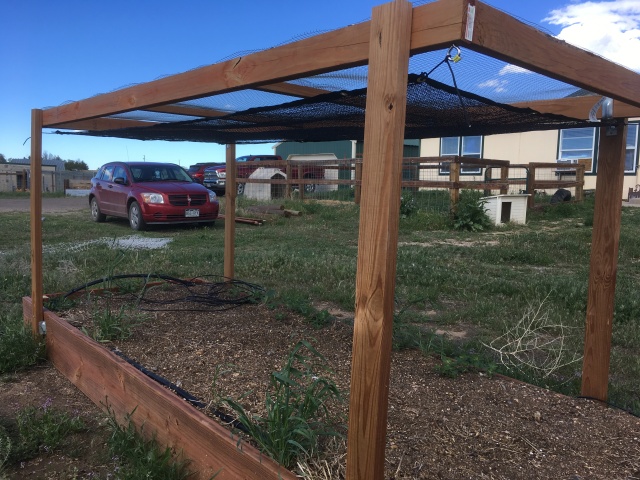 A boy and his donkeys.  He was happy and relieved to have passed all his engineering exams.  Now for a couple of weeks of recuperation before summer classes begin: 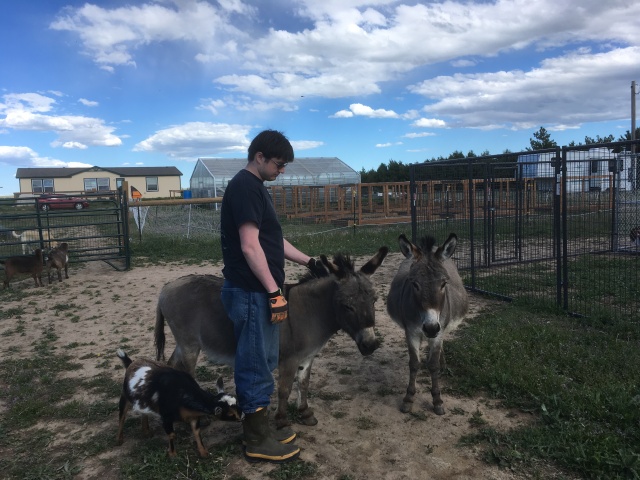 One comment on “While Folks Try To Escape On The Expressway, We Played The Real Life Version Of Farmville”