It dawned on me today that we are only a week or two away from Labor Day weekend.  It’s that kind of transition time into fall I guess.  The Cottonwoods are already beginning to yellow and the Maples, planted as landscaping trees in the city, are also beginning to turn.  This has been a summer of many types of weather.  As I write, a town to our west was just hit with tennis ball sized hail.  Usually that happens in the spring, but this year the moisture in both rain and ice form has happened throughout.  While we only had a couple of days over 100 degrees, we have had weeks on end of the very dry, mid-90’s.  We’ve been pretty good at getting out in the cool mornings to get chores and gardening done. Otherwise it just gets too hot to function.  As the storm blew through tonight on its way to Kansas, one of our basement window screens blew out and landed in our garden about 200 feet away.  Part two of this storm is on its way.  The lightning is flashing through the bedroom window blinds.

In this the early advent of fall, our gardens have not disappointed.  Harvest is getting into full swing.  The peppers have done so well that we are already dehydrating them and also giving them away.  We have Eggplant, Kale, Herbs, Cucumbers, Onions on the way, Green Beans, Garlic, Black Beans, 7 foot tall Sunflowers, and the Tomatoes have begun to turn despite some irregular watering that caused some blossom end rot, and over 60 tomato worms.  Our cabbage patch is insane.  We have been picking volleyball sized cabbages.  We stir fry a lot of it as well as mixing some into “to die for” coleslaw.  The onions will come out next.  The Zucchini have grown legs and are walking on their own. As usual, our celery is going great.  Our carrots and beets look great despite not thinning them as much as I should have   The squash plants seem to like their new home and we are starting to pick them as well.  The only thing that isn’t doing well this year are the Tomatillos.  Not entirely sure why, but they have always been a bit persnickety.  Tomorrow, weather permitting, I am going to start getting the fall succession planting in.  This will include more onions, more cabbage, Broccoli and Cauliflower.  In the next week or so I will sprout and plant spinach and seed in a bed of leaf lettuce that will give us salad until the first freeze. It appears that we have been successful in drought proofing the gardens, which is a big relief.

We are also on baby goat alert.  One of our does, Ginger, is due in under 2 weeks.  We are very excited for the new arrivals and have been working to get the kidding pen all in order. As she looks like a waddling quadruped, I’m sure she will be relieved when it’s all over too.

Today was canning and dehydrating day.  I canned tomato sauce from our first good sized harvest.  We ended up with 10 pints.  More are on the way so we will be canning tomatoes up until the first freeze, or until we are sick of it.  All told we have out about 20 lbs of peppers in the dehydrator, not to mention how many we have given away.

So other than the wetter weather this year energizing the weeds and promoting east of the Mississippi kinds of bugs, this year has gone very well.  Bring on the fall.  The sooner the cold weather kills off the flies and grasshoppers the happier I’ll be.  I’m tired of this high plains oven!  I have a fence to build.  I need it cooler! 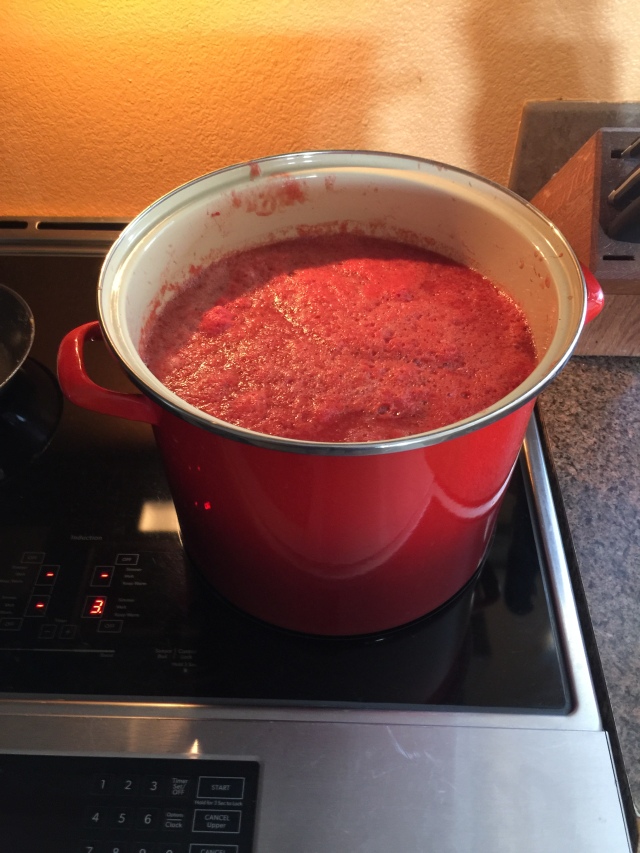