So as I figured, the food portion of our emergency homestead experiment is a no brainer.  A month?  Shooooooooot.  We have enough prepared canned meals put up to last 4 – not to mention the 2 years of dried and freeze dried foods, plus chickens that make us breakfast everyday.  So this isn’t such a big deal.  However, it does give one time to think though.  My next test is going to be seeing how it goes with all the alternative cooking methods.  Again, shouldn’t be a big deal.  Also, as we had planned for, the proper circuits are hooked up to the critical load breaker panel for the solar and all is working just fine.  As I type, I am in the basement on one of the wired up circuits and the internet is simply plugged into the master bedroom outlets.  Both of these are set up to work should the grid go down.  We’ve already had a lot of experience in this as the power goes out out here if a mouse farts in the wrong direction.

As I had mentioned in the initial introduction to this experiment, the cheat here was knowing when it was going to start.  For animal feed, I simply stocked up a bit more than normal and we already had hay enough to last a year and a half.  So the animals won’t be much affected.  Now we did say that we were going to act as though we couldn’t get fuel.  That would pose a problem with the pigs that I’m not going to address this time around.  They were supposed to go to freezer camp last week, and the weather did indeed change plans.  It got down to -2F for 3 days and we had over a foot of snow, making it impossible to 1. Get the pigs on the trailer and 2. Get the trailer out so we could drive them to the processor (About 10 miles from here).  The only way to remedy that problem if everything did fall apart would be to butcher them ourselves.  We already process our own poultry and I have experience dressing out big game from hunting, but processing two 350 pound hogs on the premises is something we will either have to remedy, or just accept the fact that no person is an island.

The next gap in the works has to do with how we inhabit this country.  Most of our relatives live in Michigan (Another in way the hell away Canada).  The week we had decided to try this off – grid experiment out, we found out that Zina’s dad had had a stroke.  Fortunately the airplanes still fly and I just got pinged via text message that she just landed.  But it gives one pause.  “What ifs” abound.  It would have to be assumed that others would simply be able to take care of themselves.  However, with some temperaments, the not knowing part would be crazy making.  Trying to get 1500 miles from here on a horse would be a challenge not worth attempting.  The crazy part of this is that we had a plan in place to take care of the farm in case we had to jump suddenly and hit the road should the worst happen in this situation.  We have a part time farm helper that gives me a break once in awhile and adds a second set of hands when having to deal with animal doctoring issues.  We knew she was going to be out for several weeks and we didn’t really think much of it.  No sooner did her issue transpire that we got the call about dad (I mean within a day or so of each other).  Now what do we do?  Now MY mother is on stand by to fly out here on a moments notice to take care of the animals while we leave here together for the first time since we bought the place.  Bottom line:  This place is well suited for bugging in during emergencies.  It gets kind of dicey should we have to leave.  Not sure how to remedy that but, as I said, this endeavor will reveal the gaps we should consider.

So over all, nothing to report on the domestic front.  All is going as it should, even if we did start out in a snow storm (that almost collapsed the turkey coop from the weight of the snow).  Now I’ll be working toward using the alternative cooking methods. Now that Zina is well on her way. It’s just me now for while.  What a hardship this is!  LOL.  What a tough life.

So what have I been doing to fill the “screen” time up?  Well, a little screen time – my hyper-vigilance doesn’t allow for complete blackouts, but mostly going to a Monet exhibit (That we’d had tickets for for the last year – his nature paintings are my all time favorites) weaving a blanket and making goat’s milk soap of course – doesn’t everyone? 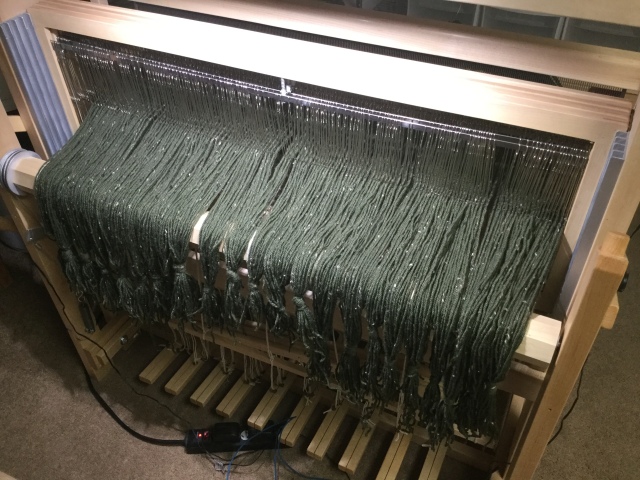