JAZ Farm has been an evolution.  While many plans, visions and dreams rarely turn out exactly as you thought they would, JAZ Farm was inevitable.  From as far back as age 17, I had an amazing disdain for cities.  All through college, all I could think about was wanting to live somewhere “in the wilderness”.  At the time this was something of a naive belief that one still actually could move to the mountains and somehow live off of the land.  What they don’t tell you  in your Jeremiah Johnson fantasy is that the mountains don’t provide much in the way of edible assets that don’t need to be shot first.  Now that isn’t an ethical issue as much as it is a scarcity.  I am a fair bowhunter, and a pretty accurate shot.  Considering how much time I spent in archery, I better be.  No the problem is that 1. There is a regularly scheduled hunting season.  Hunting out of season is a great way to get you into a whole heap of trouble and 2. There really is only so much Deer and Elk you can eat; not to mention the fact that greens are hard to come by.  I did live with ranchers for a lot of years and did learn the ins and outs of cattle, but there too, Walden had a growing season of about two and a half months.  I even experienced significant snowfall at that elevation (8200 feet) in July!

In seminary, while living and working in ranch country, I became aware of the moral and ethical dilemmas surrounding our nations’ food system.  The Green Revolution was starting to wreak havoc on the local farmer.  Thousands upon thousands of our “food creators” were being told to “get big or get out”.  A tradition, and ultimately, the most efficient way to produce nutritious food, was being decimated.  This is a topic for another time….. but believe me…. there will be many discussions about this.  We have screwed things up in some of the worst ways imaginable and it must be changed.  JAZ Farm is trying to be a part of that change.

As Aaron grew up and he found his own interests and our archery fascination slowly wained, we began getting into Xeric (water efficient) landscaping in the front yard of our Westminster home.  As I learned more and more about what poison industrial food is I started a quest for some sort of independence from that system.   The first attempt was hydroponics.  I built a hydroponic grow room in our basement.  It was a rousing success but it was in no way large enough to create enough produce to sustain a family.  However, it is absolutely possible to grow all of the salad greens one could ever need in a couple of hydroponic grow tables lit with some T5 florescent lights.  In fact, given how hot and arid our climate is, that is likely how I will always grow lettuce.  You have never seen green lettuce until you have raised it in a nutrient controlled environment!  It even has taste!

The grow room now is primarily a seedling starter room.  It also may be the room that the newly born chickens are brooded in.  The started seedlings were initially intended to provide the plants for the first part of the JAZ Farm…. JAZ Urban Farm.  Our back yard is an Urban Farm.  We have 25 raised beds and it has been astounding how much of our produce we grow in the summer and how much of it we have available through canning, freezing and dehydrating throughout the winter.  Of the 45 tomato plants I grow out back each year, we NEVER have to by any kind of tomato products except for an occasional can of tomato paste.  The taste is second to none!

JAZ Urban Farm was our attempt to create something similar to a family we found on the internet – The Dervais Family.  If you do a You Tube search you will find these folks living not too far from the Rose Bowl in Pasadena California.  On a postage stamp sized lot in the city they raise and sell produce, eggs, and goat’s milk year round.  Now, they are fortunate to not have the season we fondly refer to as winter, but given the restricted growing season out here, we achieved an amazing success.

Growing in Colorado presents some challenges; the least of which is the short growing season – The biggest…. water.  One learns very quickly how to conserve water and, through the use of different kinds of mulches, keep the water sequestered in the beds instead of evaporating off into the stratosphere.   It isn’t inexpensive to get started, but if you spend the money to build the beds, put in the drip systems, and as I did, put mini-greenhouses over all of them, it is simply the net present cost of all the produce you won’t have to buy.  This isn’t for the inactive.  Just as we learned when we got Basil the dog, one doesn’t buy a Yellow Lab if you want to be a couch potato.  Gardens, too, don’t grow themselves.  Leave them to their own devices and you will find a weed patch just happy as can be to choke out your Roma tomatoes.  My rodent control is a little less than conventional.  I try to be organic with pest control, and I do the necessary weeding, and use drip irrigation.  However, when them little brown varmints with the big fuzzy tails come around and they threaten to put bite marks in my gorgeous Oregon Spring slicing tomatoes…. sucker’s gotta go!  They usually meet with some unfortunate demise where they get a hole in them and fall off the fence….. “honest officer I think it just slipped!”

James Howard Kunstler, an author, wrote a book entitled, The Long Emergency.  I would recommend it to everyone.  Suffice it to say that we cannot have infinite growth on a finite planet.  Kunstler is someone pigeon holed as being a “peak-er”, someone who researches and believes that we have hit the peak of the easily accessible fossil fuels on the planet.  From here forward it will be more and more difficult, and more and more expensive, to extract oil from mother earth.  He wrote a phrase that I believe completely, “The creation of American suburbia has been the greatest mis-allocation of resources in the history of the world.”  It is not possible to do much in a suburb that doesn’t entail jumping in a car of some sort and motoring off to somewhere else.  If we are indeed at peak oil, and our food travels some 15o0+ miles to reach our plate (and often ridiculously longer miles – like 90% of our garlic coming from China!), then food is destined to get amazingly more expensive and scarce.

Armed with that information, the desire to grow our own food and somehow live off the land and become more sustainable, we began a search for somewhere to homestead.  We don’t have any delusions of quitting our day jobs and becoming Green Acres, but having someplace away from the suburbs that offers infinite opportunities for us to experiment, and sometimes, simply to sit and contemplate our navels, the peace of the country has already been recharging.  As a financial advisor, I work in the heart of the insanity of our “capitalist” system.  As much as I love my clients, I hate what I am having to defend them from.  JAZ Farm allows me to feel like I have some control over other aspects of my life that don’t involve my career.

Our astronomy club has a dark site for observing in Deer Trail, Colorado.  It is out I-70 on the eastern plains.  It is beautifully desolate; grain fields as far as the eye can see.  On our way out to the site, we would take side trips to the little bergs along the way.  Because of the housing bubble and financial collapse, a lot of the small homesteads were coming on the market as foreclosures.  To make a long story short, the first one we found fell through.  This one happened shortly thereafter.  Physically, it was a complete mess.  I will post some pictures of the interior before and afters.  It was built in 2006 and we got it for a song.  The problem was that it it didn’t look like anyone had ever cleaned it or much less cared for it.  We had to repair windows, put on a new roof, completely redo and repaint the interior, fix water damage, and generally get it so that it was liveable and not look like a slum.  The previous owners evidently had dogs that had the run of the house.  They must have smoked.  The dirt inside was unreal.  Thick to the point that a rag would simply make mud.  When we had the carpets steam cleaned they literally changed colors.

The fortunate part was that it was just what we wanted.  The months after the closing have been a non-stop fix up.  We are finally seeing the end of it.   The JAZ Farm projects can now focus on…. the actual farming!  40 acres, a well, a house, a chicken coop, a garden, an astronomy space, and a barn. This is all very exciting for us.  Thanks for looking! 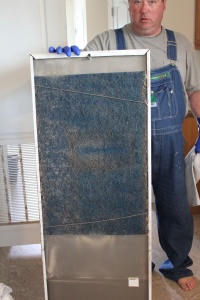 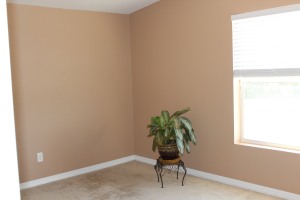 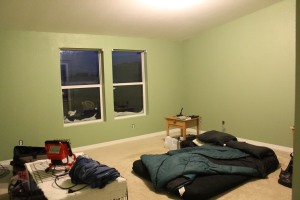