I got up the nerve and tackled the chicken wire issues this past week.  The run needs to be covered in order to keep falcons and hawks from dive bombing the chickens.  Evidently out here in the plains the threat is from both above and below.  The below part comes next.

Chicken wire is infernally frustrating stuff.  It hangs up on everything and bends and then, of course, makes you bleed.  The local hardware store sold rolls of the stuff (technically I guess called “Poultry Netting” – as far as I’m concerned there is no “netting” about it) 6 feet tall and 150 feet long.  Just about right for the amount of space I needed to cover.

The first thing I needed to do was cut off the cute little decorative thingies that were on top of the gates.  They were welded on so I let the sparks fly with my reciprocating saw.  At one point the blade let loose and hit me in the forearm and BURNED me.  Gotta remember, metal on metal gets HOT!  I mounted sections of chain link top rail across the gates so there was something to tie the netting to over the gate.  The gates seem to be the weak link and are needing to be reinforced to both avoid escape and deter ground based critters.

I mounted six shelving brackets to the front of the building to use as anchors.  I needed to get the wire above the coop door in order to be able to open it and this seemed as good a way as any.  I cut a whole roll of re-bar connecting wire into 8 inch pieces and used it to tie the chicken wire onto the fence and the tick tack toe structure I put in to allow for the protective wire roof.  I was able to hang one end of the roll over the fence and then hold it over my head and unroll it the length of the run.  The six foot wide sections then needed to be “stitched” together with the wire ties.  Once done, then it needed to be pulled taught in order to avoid it all being droopy.  Most of it is fairly flat.  In some sections a little droop was unavoidable.  None of it looks like a chicken wire hammock though.

It all seems to have worked well.  We have had ample breeze and it doesn’t seem to have been bothered by it.  We will see what the first big snowstorm does to it, but so far so good.  This is one part of the construction I won’t miss.  I got all scratched up and spent three days working with my hands over my head tying the netting into place.  Need to find a good Jacuzzi.

This is one BIG birdcage.  Thanks for looking! 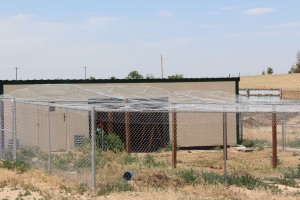