I received a call at about 10:15 am today.  It was the Post Office.  I was informed that the chicks had arrived and were waiting for me to pick them up!  I was kind of shocked actually as the tracking number said that the delivery date was estimated to be two days from now.

I arrived at the Post Office and told the attendant that I was there to pick up probably the only box in the building that was cheeping!  She chuckled and went back into the back to look.  They were making so much of a racket that you could hear them when she was quite a ways back in the sorting room.  When she brought them out it was so funny to see the looks on the city folk’s faces.  One lady standing next to me must have just come in off of the tennis court.  She was wearing all the “proper” attire and just giggled when a noisy card-board box was set next to her, peeping away!

I had called Aaron from the road and he helped get all the necessary things set up and going.  Zina even took time from work to come and see the new children.  We are brooding them in our grow room.  Once they are a bit bigger they will go out into the garage and then on out to the farm coop (where I was today when I got the call!)

The brooder needs to stay at 95 degrees for the first few days.  Once they start feathering, the temperature can be reduced about 5 degrees at a time until it is no longer needed.

Upon arrival, the box is opened and inventory is checked.  The hatchery guarantees live delivery.  We lost one but I’m not going to make a claim.  They are only 3 dollars and it seems stupid to ask them to send me one bird when they had already thrown in a free “mystery” bird (which on my first take looks to be a Speckled Sussex – This makes sense to me because it, like the Orpingtons we ordered, are an English breed).

As the chicks are only a day and a half old upon arrival, they have never eaten nor had anything to drink.  The food needs to be out and sprinkled around.  The water solution is sugar with some electrolytes mixed in that were sent by the hatchery.  To get them in the pre-warmed brooder there are three things that need to be done:  1.  Check their little behinds to make sure they don’t have Pastey-Butt (just like it sounds, Poop caked over the bun-hole that doesn’t let them defecate) 2. Dip their beaks in the water and make sure they actually take a drink (kind of like a chicken swirly) and 3. Put their little heads in the food holder so they know where the food is.

They learn fast.  They are also thirsty and ravenous.  It didn’t take any time at all and they were scurrying around the brooder.  If you tap your finger on the floor of the brooder they will come running over as they think you are another chick pecking at something fun. Then they start to do it too!

They can sleep virtually anywhere!  We had one fall asleep next to the waterer still standing up.  They run around like crazy and peck and do the little chickie dance things they do. Then all of a sudden, wham, they lay down and take a nap.  You have to be very patient with this because some of them look like they have fallen over and died.  Then, just as quickly as they fell asleep, they are up eating watering, pooping in their food and running around again…. insanely cute.

Aaron and Zina named the mystery bird, Sorpresa, which I guess in Spanish means Surprise.  I could only come up with a couple of other names: Omelette, Lunch, Dinner, and Fajita, Stew, Soup, Shish and Kabob.  Will have to work on it I guess.

They are much more alert after a few hours after what must have been a freakish ride on a Postal Service semi.  The temperature seems to be to their liking and they are settling in nicely.

The first JAZ Farm non-pet livestock are at hand!  Now its up to the farmers to see if we can keep them alive! 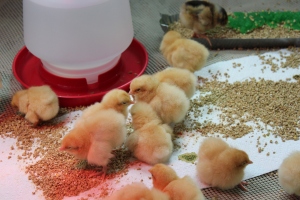