Now that the place has dried out some and we have had some cold evenings to knock down what has been a plague of mosquitoes, the next project in building the JAZFarm has begun.  Just like one has to defend against predators when building a chicken coop, the garden needs to be able to keep out critters… namely rabbits, deer and antelope.  I am not in the business of raising vegetables for the local wildlife!

A few weeks ago we acquired a tractor mounted post hole digger.  After using a hand held one for our dog run, and having the life shaken out of me trying to get into our concrete soil, I decided that there was no physical way I could hand auger the 60 post holes needed to enclose the half acre garden.  Today (my birthday!) I got the thing hooked up and took it out for a trial run.  Worth every penny!  It dug a 30 inch by 10 inch hole inside of 5 minutes.  The two holes I tried it out on would have taken half the day the other way.  This was pretty much done with no blood, sweat or tears!  AND, I can still walk!

The fence will be kind of a rectangle with a corner cut out of it on the north side where there is a metal wall that serves as a good wind break.  The posts will be 5 feet tall, cemented in and we will have a narrower people gate as well as one wide enough for the tractor.  The chicken coop will be enclosed within the perimeter of the fence, thus providing one more layer of deterrent against would be 4 legged chicken lovers.  The field fencing has squares in it that get narrower the closer they get to the ground so that rabbits and such can’t squeeze through them.  Once done we will then decide if we need to run an electric wire around it or if it is a sufficient fortress  to keep the produce safe for humans instead of deer.

So I have posted some pictures of the auger and of the post layout for the fence.  Zina has been tasked with hiring contractors to replace the front and side doors of the house and to have the whole place painted.  Somethings just never end.  Also posted are some obligatory chicken shots! 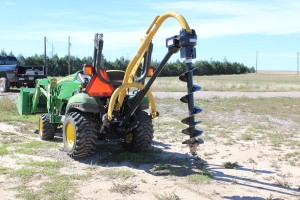 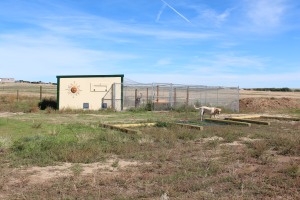 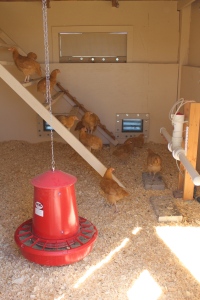 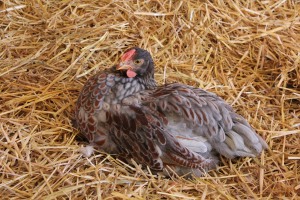 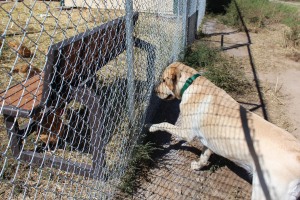