The pigs have been an adventure and a lot of fun.  Because of the Hampshire markings we have named one Oreo, because she has a white stripe across her shoulders and a black front and back, Double Stuff, same markings but wider, and Bossy…. well, because she is.  Doubles came down with a respiratory infection about a week or so after we got them.  So Farmer Jon got to be a Vet.  2 a day injections of penicillin.  If you have never heard a pig scream…. wow.

Since then, and now that the weather has been a bit more hospitable they are out hopping around.  Bossy doesn’t move around a lot – lazy pig – but the two cookies are almost Siamese Twins.  They never leave each other’s sides.

Pigs don’t sweat, so they need to have a way to stay cool.  We dug out a pit and filled it with water and it has become a great wallow for them to play in.  With the wet weather the flies and mosquitos have been pretty vicious and it seems that they have learned how to cover themselves in mud and that keeps them from getting all bitten up.  Pretty genius for a hog!

Basil the dog gets sooooo jealous when we are out feeding them.  We have let her in on occasion to play with them and they all seem to get along fine.  However, once the excitement has worn off and all it seems that they are doing is trying to bite each others ears, its time to separate them.  Today they all had a great romp in the mud! 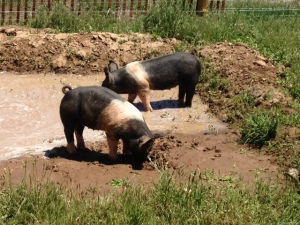 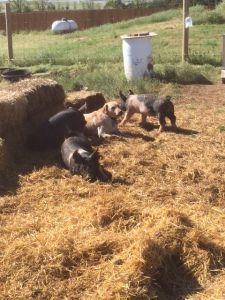 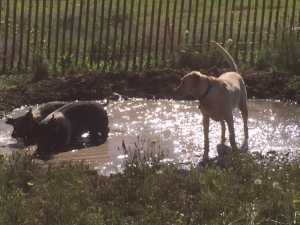