So the storm is over.  The mud has begun and the roads are horrible.  There is a big Caterpillar front loader down the road from us stuck to it’s axles in the mud, and from what I hear, Nebraska is already flooding severely and they are monitoring the water levels around a nuclear plant. The locals at the cafe were expounding how they have never seen the like;  But thats nothing!  Everything is well for everyone else;  We have GOATS!

Goats like to be up high.  No.  They LOVE to be up high!  Just like mountain goats, they are climbers.  The bucks have the bomb shelter to hop around on; BUT, now there are a whole bunch of new high places to play on!  Snow drifts!  And, of course, the snow drifts have completely buried sections of the fences!

I went out to feed this afternoon and I turned to look, as the boys were calling to me like they usually do, and there they were…. on top of a drift at the edge of the fence line.  I think there is only one reason they didn’t walk over the top, down the other side and off into the big wide world:  Electric fencing.

Because the fence is essentially buried right now, the hot wire is grounded out.  They wouldn’t get shocked if they touched it;  But they do know what it looks like and what it does.  I think it was enough of a deterrent to keep them from stepping over the top and going off into the great wide world.  But wait!  That’s not all!  The same thing is true in the pasture where the girls live!  Not only is this a problem with the goats, turkeys also like to get up high.  Their drift is right next to a tree line (roosts!) and is as tall as I am.  This one buried the fence completely!

Nigerian Dwarf goats come into heat once a month.  So maybe they didn’t escape today, but two of the girls are still due for March and we could look out one day and see out of control Foat Gucking right out in the driveway!  Trust me, they will move mountains and swim oceans to “satisfy” their needs.  Worse than teenagers.

Then… we have two yellow labs!  Bird dogs!  They like chickens and would love to play with the goats!  Sage has already found the entertainment value of running up the drift that could give her access to the chicken run.  There is never a dull moment when it comes to the critters!  As we have also had some trouble with foxes, now the access to the chicken free range pasture is now open to the public.  Chickens, as well as all the other critters, stay put until these things shrink (supposed to be 60 next weekend).

Quick thinking and problem solving needed doing.  We have the ability to separate the big chicken coop into two coops.  So I did it and put the boy goats in that side of the poultry barn (Should have done that during the storm too.  Live and learn).  They now have part of a small barn and half the fenced in run to goof around in.  They will be fine and I won’t have to try to rope two rambunctious goats running down the county road – I’ve already done that with piglets, wouldn’t recommend it.  Because chickens are stoooooopid, the bucks will be sharing the space with one chicken that refused to go over with the rest of the flock.

The girl goats are sequestered in their pen in the barn and the turkeys are in their coop, also closed up.  There will be no free ranging for awhile.  Zina thought we could keep them in their pens until we have a chance to plow out the drift.  Nope.  Its WAY too muddy and because it is warming up, the snow is too heavy.  So until these drifts melt down some, the playgrounds are closed.

Julio and Donovan, the two gray Gurus, just stand there looking at me like I’m a mental deficient.  All they want to do is roam the pasture, but it is a mud hole so they just hang out in the barn.

As if two days of a land based hurricane wasn’t enough; This melting is already a mess and yesterday it was still a storm….. oh ya, there’s a chance of another round next weekend (probably rain this time.. oh joy).

It’s always an adventure.  Golf…. I guess I could sell it all and go play golf.  Nah.  Too many people, my back doesn’t bend that way anymore, and its a game that is almost as stupid as the chickens. 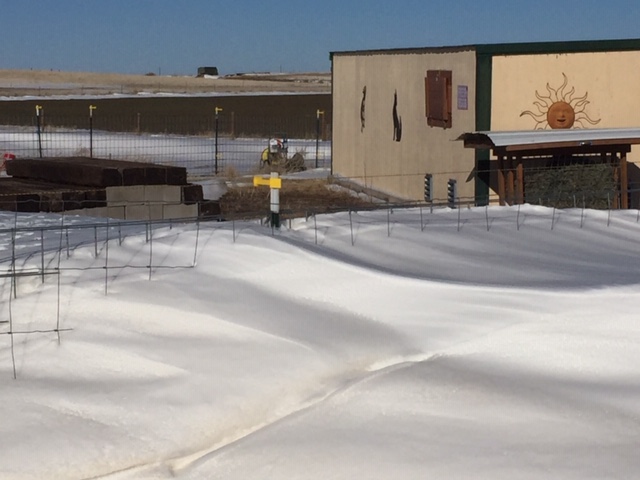 (Above) Boy goats and chicken free range pasture. You can see the bomb shelter in the back (the cinder blocks and railroad ties). 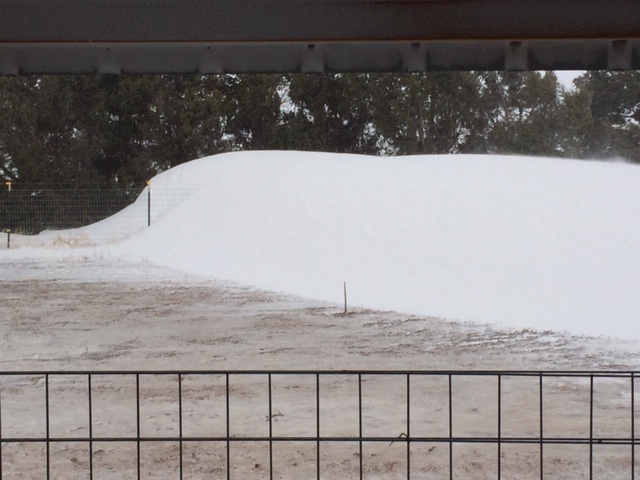 We also have a new neighbor husky dog who’s owners think its ok for their dog to run all over creation.  He/she can get through those trees.  I’ve seen it sitting there drooling over the turkeys.  I’ve warned the neighbors that I’ll shoot it if I see it in the pasture chasing the goats and turkeys (The donkeys would stomp it if it got too close to them).  Now it has a ladder straight into a turkey dinner.  All of my defenses have been breached!!!  Melt, damn it, melt!