Our hatchery has a practice of including a “mystery” bird with an order.  The idea, I guess, is to expose people to other types of birds and as a thank you for ordering from them.  Our order this past July was all Buff Orpingtons (3 roosters and 30 hens).  They are all “buff”colored, hence the name.  The mystery bird was obvious from the first day we got her.  Aaron told us that the word in Spanish for surprise is Sorpresa.  So that is what the little chick got named.  ‘Presa for short.  You can pick her out in this picture of when they were just two days old. 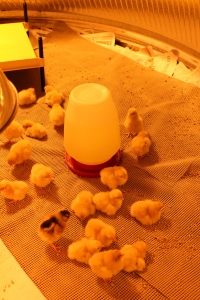 She grew along with the rest of them and for no particular reason, we assumed that she was a hen.  So Sorpresa was referred to as a “she”.  Here are some growing up pictures: 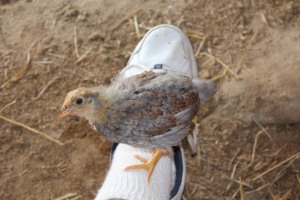 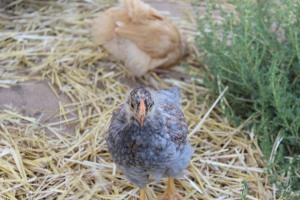 Sorpresa grew into a quite a large bird.  Zina suspected that she might be male a couple of weeks ago.  We looked her up on the internet and she looked for all intents and purposes as though she was a she.  We assumed that the breed itself was pretty large and still assumed that she was going to end up being an egg laying addition to the family.

Until today.   Sorpresa was caught in the act of crowing.  Case closed.  She/he has a pretty good voice too.  We have now been able to discern that yes HE does possess the rooster’s tail feathers and the comb of a male Wyandotte.  Unless “she” was mimicking a rooster – which I’ve never heard of – ‘Presa is going through a sex change in our heads.  Sorpresa….. is a rooster. Here he is and then another of the Orpington boys to compare to. 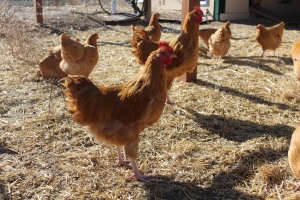 Now while this has all been fun and the “mystery” bird has certainly lived up to his billing.  We will not be having 4 roosters in the hen house.  They are nice enough to each other now but there have been skirmishes for dominance.  As we wanted a pure Buff Orpington flock for layers and some boys to help produce hatch-able eggs,  Sorpresa the rooster is likely to become Sorpresa the Fajita.

2 comments on “Sorpresa Lives Up To “Her” Name”