Our chicken processing equipment has all arrived.  We ordered kill cones, knives, a catching net, and automatic plucker. Monday I am heading up to Ft. Collins to pick up a stainless steel processing table. We hope at some point to not only raise our own chickens as we do now for eggs, but also hatch them as well.  This will let us replenish our flock as well as utilize them for meat without having to have them shipped by mail as chicks whenever we need new ones.

This year, however, because of time constraints we ordered 30 Cornish X chicks.  They will be arriving May 12th just a week before our visit from my mother.  These broilers grow incredibly fast (they are the basic breed used in all of your cellophane wrapped grocery store birds.)  In just 10 weeks they will be ready to be put into the freezer.  This will easily provide us with all the meat we will need for the rest of this year (we have plans to raise some pigs too but that will be another evolution and more posts as  – if –   it happens).

We had one rooster out of our four that, well – quite frankly, was a pain in the ass.  The other 3 would crow, but “Spike” as we called him (because of the way his crop was shaped) would crow about every 20 seconds for HOURS at a stretch.  I kept threatening just to shoot him and throw him to the coyotes, but was convinced by calmer minds to wait until the processing equipment arrived and use him as the trial run.  That trial run was today.  Spike, became tasty stew.

Roosters need to be slow cooked. Their meat, compared to younger pullets and cockerels, is pretty tough.  It is very flavorful, but it isn’t something you would cook up and serve with potatoes to Sunday guests.  As with farm fresh eggs, the flavor of the meat is leaps and bounds better than the store.  The birds also live a very good life prior, which, we think, is important.

So here are pictures of the trial run.  If you have a queazy stomach, don’t look; but this is a blog about farming and homesteading.  This goes along with it. 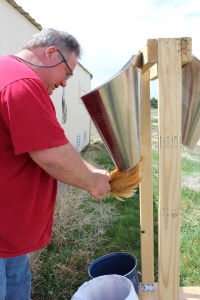 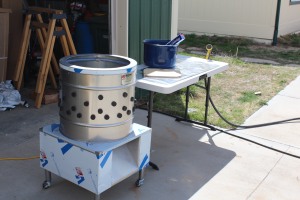 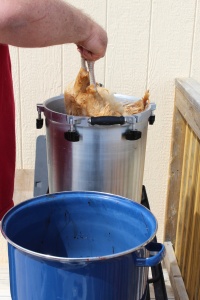 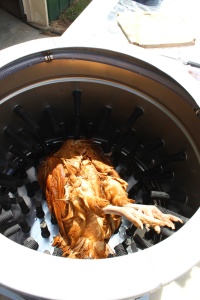