I have to admit that these guys work fast.  After the fiasco involved with getting our greenhouse and getting fleeced with our solar system, having this crew get in here gettin’ it done is quite refreshing!  Today they have almost finished the framing.  Before it rains tomorrow they will be coming out to finish the cross bracing, framing for the overhead door and framing for the people door.  If they keep at this pace, I’d expect them to be mostly finished next week.  They still have to put on the the over hang (lean to) but this thing will be wrapped up by months end at the latest. 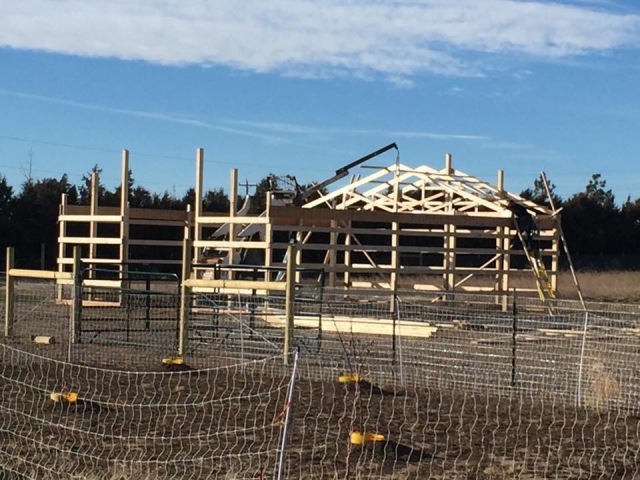 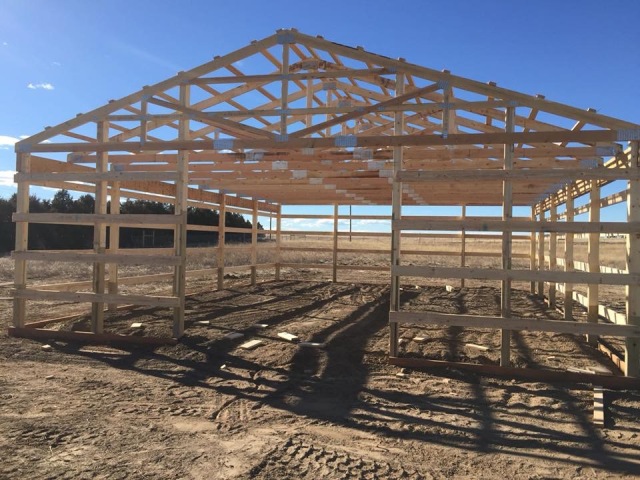 In the mean time, I have been steadily getting the pasture enclosed.  Because we are getting goats and donkeys everything says not to skimp on fencing.  I didn’t.  This is about a quarter mile of “No-Climb” horse fencing.  A 200 ft roll weighs about 200 pounds and, of course, I have 8 of them.  I’ve learned to use the tractor to move them around.  Pre-surgery I’d have just heaved them about.  Also, all of the nailing and such that happens close to the ground has had to be re-learned.  I don’t bend like I used to so most everything from about 18 inches to the ground is done more or less with a lunge.  It’s a lot slower going than in my “Strapping young socialist Muslim”days, but I have more time in the day now that Eliot took over at work and I’ve “retired”.

I learned how to splice field fencing today.  Because the sides of the pasture are all about 330 feet long, one roll of this fencing won’t get there.  So to make it reach, two rolls have to be spliced together.  It works great but it’s very time consuming.  Also, as it is a lot like sewing with metal wire, getting poked and scratched and hung up on everything, seems to be standard operating procedure.

I’ve built my share of fencing.  For non-large animal enclosures, you put up corners, H-braces and fill in the gaps with more single wood posts and/or metal T-posts.  Once the skeleton is up, then you wrap the wire around the perimeter and nail and tie it all into place.  Not so here!  Larger animals love to rub on things, especially exposed fence posts.  Consider a 1200 lb. cow.  If she sets to scratchin’ what itches and the fencing is on the outside of the posts, then all the weight is being born by the post and it’s staples and clips.  Soon the fence starts to sag and critters take themselves for a walk down the road.  So this fence, because of the potential of having larger animals, has the fencing on the inside of the frame.  Every corner has to be sewn onto the posts and woven at the corners instead of simply wrapped and nailed.  Pulling it taught (stretching it) also becomes a challenge because the corners get closed off and you have to put the come-a-long through the fence that is at 90 degrees to the fence you want to stretch.  It takes way more time, causes way more cussing, and takes many more staples.  But in the end, now that it is strung inside the posts, if said cow rubs up against the fence, it distributes her weight along the fence and thus several posts instead of it being concentrated on a single one.  So it’s worth doing, it’s coming along very well, there have been some snags, but it is turning out to be one stout cage.  Once that is finished, in order to further deter escape and fence destruction, it will have 3 strands of electric wire to act as a psychological deterrent to keep them away from it. 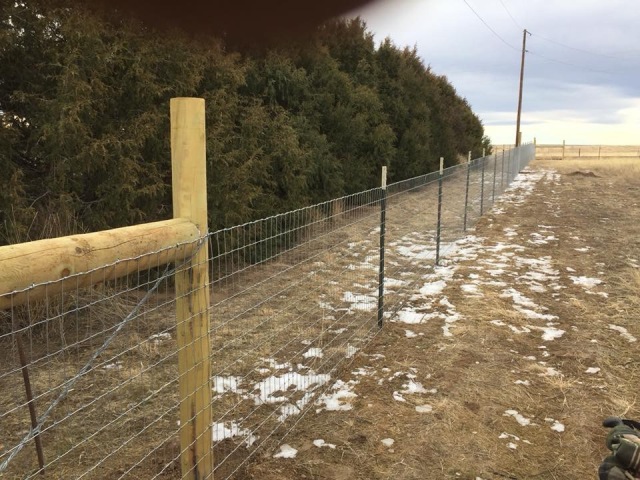 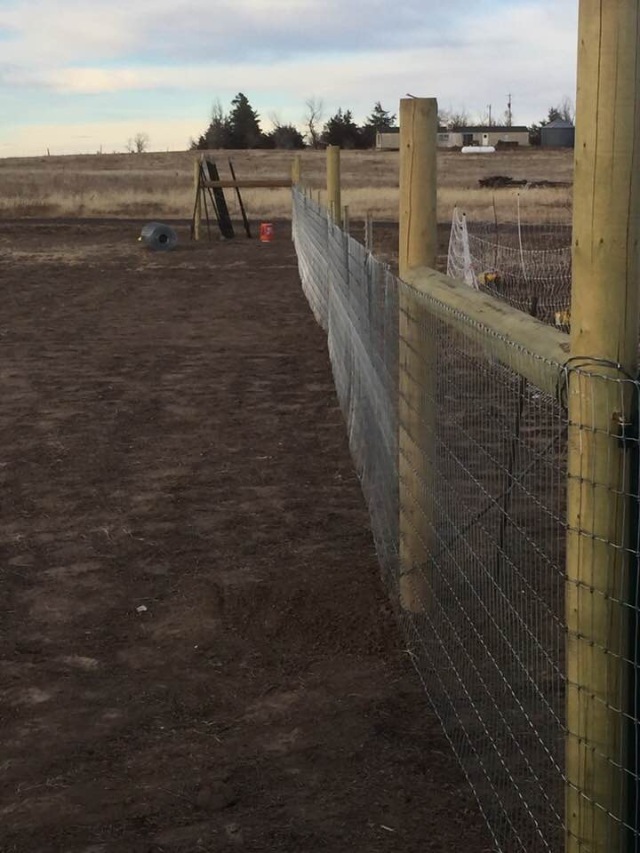 As, I had mentioned previously, the livestock barn will serve several purposes.  One, we are going to get a few goats.  Whether or not they become meat, dairy goats, or just eating and pooping machines, remains to be seen.  Also, once completed, I’m going to build a chicken brooder inside so we can eventually quit having to have them in our basement for a month at a time.  In addition, a flock of turkeys is on the horizon and their coop will be made from chain link dog kennel panels, inside and outside.  Lastly (ya right), there is an animal shelter near here that rescues donkeys.  It is likely that we will be adopting two of them once all of this construction is over.  One requirement that they have is that the donkeys have their own outdoor corral in addition to the pasture where they can come to eat, feel safe, and have grooming and medical issues tended to.  Last weekend that was accomplished.  I guess there is not turning back now! 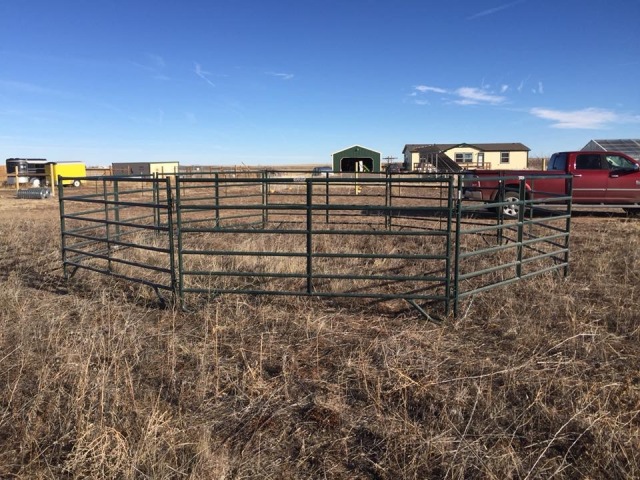 I follow a lot of homesteaders, both on blogs, Facebook and You Tube.  I have yet to find any who bought a field of grass with just a dilapidated house, a garage and run down horse shed, and transformed it into a fully operational farm.  Sure, there are many who have done some incredible things, but I suspect for lack of resources, many are done via the “make do” approach.  Most are many years our junior so what they lack in resources they make up for in energy.  This is the last hurrah.  There will always be the need to repair things and some lesser, non-urgent projects (I would love to dig a root cellar), but this marks the end of the major construction.  It has to be the end.  I’m pretty good at all this building of things, but my dream was to be able to actually enjoy the farming part.  So far, everyone else has gotten to play – including in my greenhouse!  Now it’s my turn too.  I am looking forward to a life of simple routine.  I relish the life of getting up and tending animals, gathering eggs, making breakfast (cooking in general again) spending time with the livestock, spending hours gardening, harvesting and canning and building our food storage, all without the feeling of some urgency of having to have to get the place built before I’m too old to play with it.  The finish line is on the horizon.  Three more sections of fence, a couple of pens, and Farmer Juan gets to play with his creation.  That will be something to behold.