Wouldn’t you know it – Mother’s Day weekend – which is supposed to be our “average” last frost date, was met with a spring blizzard.  The mountains got up to 3 feet of snow and the lower elevations around 5000- 6500 feet got around 5 inches to a foot!  At the same time, I received a text message from our hatchery that our roasting chicks had shipped!  Great.  Anticipating warmer weather (because it was in the 80’s the previous week) we set the brooder up in the barn.  Now… in the sloppy wet rain and snow it had to be taken down and the 300 gallon watering trough we use as the brooder had to be rolled around to the back of the house and into the basement.  It froze my fingers as the tank is made out of steel.  Now the brooder is set up in our exercise room.  Oh goodie!

I got a call from the post office at 8 am today (Monday) saying the chicks had arrived.  I got up there and got the cheeping box of fuzz balls in the rain and sleet.  I gave a little boy a thrill though.  He was about 3 years old and I let him look into the box before I left.  “Look Mommy!  CHEEKINZ!”  Everyone in line at the post office had a chuckle.

The little puff balls made it to the farm with no trouble and they are now happily eating, drinking, pooping and sleeping in their new 3 – 4 week condo stay.   After that they go out into the big coop for 4 – 5 more weeks.  It looks like mid-July will be chicken harvesting week. (It came in handy that the truck has heated seats.  I had them on the passenger seat and it kept them nice and toasty).

I read a quote once that said, “If you have an animal and it has a name, its a pet.  If you have animals and they have no names, they are food.”  These ones have no names; except for humorously saying that half are named lunch and the other half, dinner.  Aaron said we should name all of them Nuggets.

Now, between the layers in the big coop and the broiler chicks in the brooder we have over 60 birds.  Taking care of them will give us something to do until the garden dries out and we can get out to till and plant. 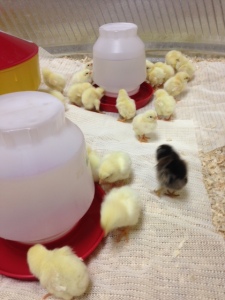 6 comments on “Pre-Lunch and Pre-Dinner Have Arrived”