So long as no more hail comes in and kicks us in the ass, the JAZ Farm garden is virtually planted!  There is still the corn patch to seed but the fancy Earthway Seeder will take care of that in short order.  We used over 4000 feet of drip tape and have water to the half acre garden!  It all WORKS!  Woohoo!

While a bunch of the plants got pretty beat up by the hail storms it all certainly looks to be bouncing back.  Yesterday the eggplant looked kind of pathetic, but with the watering system up and running they have perked back up!  The biggest concern right now is the half row of cherry tomatoes.  Second in line to the beating the peppers took, the cherry tomatoes really got nailed.  They are spindly to begin with so they are pretty susceptible to being damaged.

The big plants (eggplant, tomatoes, peppers and tomatillos) took a ton of work to get planted.  Zina and Grandma did the planting work and Jon did the trellises.  We dumped a bunch of compost on to one of the beds and seeded in carrots and beets.

Aaron finished up the drips on the corn patch.  Now that all of the drippers are laid, it is apparent that we don’t have enough seed.  We are going to plant seed corn, sunflowers and kidney beans.  For any space that we don’t have seed for we will plant some of the alfalfa seed I ordered.  That way, the beans and the alfalfa will add nitrogen to the soil as well as keep the ground covered so as to avoid simply watering weed seeds.

As long as the weather doesn’t get violent again, all should be good.  We decided we needed to add one more drip line per bed to saturate the surface area better but that is certainly a minor issue.

Now we sit back, wait and watch.  All JAZ Farm eyes will be looking for the little shoots that signal some sense of success.  Fingers crossed…….. 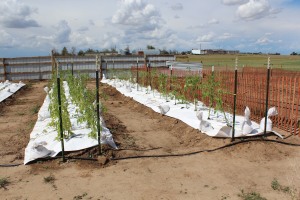 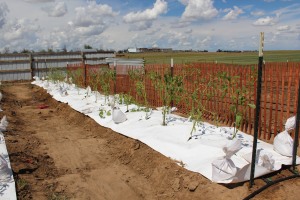 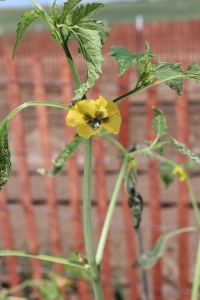